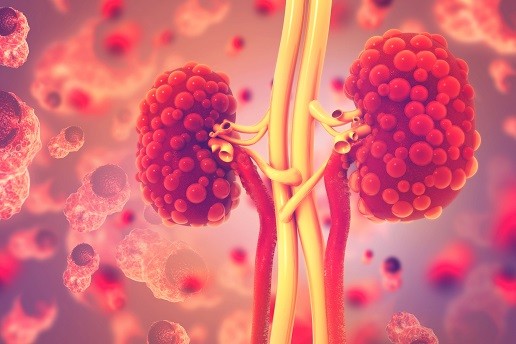 Measuring levels of amino acid D-enantiomers may reveal which chronic kidney disease patients are at greatest risk of disease progression. Chronic kidney disease (CKD) is a rising health problem, with patients prevalent throughout the world and the number progressing to costly, life-threatening end-stage disease increasing every year. To tackle the problem at its root, nephrologists recommend early referral of CKD patients so that they can be treated before progression – but at the moment, there’s no good way to predict which patients are at risk. Doctors use indications like decreased kidney function, proteinuria, and additional complications like age or other diseases – but all of these have flaws, and there’s a great need for a more effective test.

Tomonori Kimura and his colleagues at Osaka University sought out just such an alternative – and discovered that levels of D-amino acids, normally present in only trace amounts in humans, could predict progression to end-stage disease
(1). “All D-amino acids are measured simultaneously by 2D high-performance liquid chromatography (HPLC),” explains Kimura.“The first HPLC separates each amino acid, while the second separates D from L enantiomers
(2). This method allows for absolute quantification, allowing us to directly compare our results to those of other studies.”The researchers found that some D-amino acids, particularly D-serine and D-asparagine, were robustly associated with theprogression of CKD; the risk was elevated two- to four-fold in those with higher levels.

“I’m certain that a D-amino acid test would change clinical practice,” Kimura says, “but we need further studies to validate its utility in specific clinical situations, and measuring D-amino acids is still a challenge. Though our system’s throughput increases year by year, we still need much higher throughput to meet clinical demand.” In future research, he proposes to focus more on specific kidney conditions and to study the poorly understood physiology of D-amino acid metabolism to increase its utility as a biomarker. “The D-amino acid world is a mystery,” he says, but he and his colleagues are working hard to solve it.

The UAE has introduced the implementation of Value Added Tax effective 1 January 2018 at a rate of 5%. Conferences that take place in the UAE are liable to Value Added Tax under ‘Federal Decree-Law No. (8) of 2017, which will be reflected on all conference fees.

Beware of unsolicited websites and companies. Only the official Medlab Middle East registration forms can confirm your participation at the show. The list of official suppliers can be seen here.

Medlab Middle East will be organised in accordance with Informa’s AllSecure health and safety standard.

Our global reach in Healthcare

Whether in person or online we enable deeper learning, relationships and decisions.
Staging 15 exhibitions, 110 conferences and reaching over 700,000 healthcare professionals we are where the world of healthcare meets.

Together for a healthier world