A diagnosis of NIFTP promotes much more conservative surgical management of patients and helps to avoid radioactive treatment postoperatively.

Non-invasive follicular variant of papillary thyroid carcinoma (FVPTC) has recently been reclassified as “invasive follicular thyroid neoplasm with papillary like nuclear features” (NIFTP). This is an indolent, low risk tumour that likely represents the preinvasive stage of invasive FVPTC. The implication of NIFTP not being classified as a malignant entity is important as it spares patients the burden of a cancer diagnosis.

A diagnosis of NIFTP promotes much more conservative surgical management of these patients and helps to avoid radioactive treatment postoperatively. The traditional management of PTC includes total thyroidectomy, central neck dissection as well radioactive iodine therapy. Surgery is extensive and may include complications such as hypothyroidism, which is especially important in our population where patients often show poor compliance with medical treatment in general. Other postoperative complications include injury to the recurrent laryngeal nerve and inadvertent excision of the parathyroid glands. Radioactive iodine may be associated with salivary gland dysfunction and the development of secondary malignancies.

Molecular studies show that NIFPT has more frequent RAS mutations. They also demonstrate PAX8/PPARȣ; THADA fusions as well as BRAF k601E mutations. NIFTP molecular alterations are in contrast to conventional PTC, which tends to be associated with BRAF v600E and RET fusions. The molecular profile of NIFTP is similar to follicular adenoma and carcinoma. Sonographic features of NIFTP include a benign appearing, round to oval well circumscribed nodule with a hypoechoic rim.

In this report, a case that was recently diagnosed as NIFTP in our institution is discussed. A 49-year-old female who presented with a 5cm right thyroid mass of six months’ duration. She is HIV positive with a CD4 count of 391. Cytologic examination revealed a microfollicular and dispersed pattern throughout; microfollicles with inspissated intraluminal colloid.

Surgical excision (right lobectomy) revealed a solitary encapsulated nodule. The tumour measured 75X60X60mm; showed a homogenous cream coloured surface with areas of haemorrhage. Extensive examination of the capsule revealed no evidence of capsular and/or lymphovascular space invasion. The architecture was entirely follicular with no papillae and/or psamommatous calcification. A diagnosis of NIFTP was made. (Figure 4-7).

NFTP is a surgical diagnosis i.e. the diagnosis is made with certainty only on excision specimens. There are several studies that have been conducted to determine whether a NIFTP diagnosis can be made prospectively on cytologic samples. Result outcomes are poor thus far with some series showing preoperative accuracy rate of 21 per cent.

Strict criteria must be adhered to for a final diagnosis of NIFTP. The following histologic and molecular features must be met:
– The tumour must be well circumscribed; completely or partially encapsulated
– Where there is partial encapsulation, there must be a distinct interphase between tumour and surrounding normal thyroid parenchyma with no tongues of tumour infiltrating normal thyroid
– The predominant architectural pattern should be follicular with no papillary structures. If papillae are present, they should comprise less than 1 per cent of the tumour volume
– Unequivocal nuclear features of PTC must be present i.e nuclear pallor, INCIs, longitudinal nuclear grooves; nuclear crowding, overlap and elongation; small nucleoli
– If concomitant thyroid carcinoma types are present – solid, trabecular, insular – these should not exceed 30 per cent of tumour mass
– No psammoma bodies
– No tumour necrosis or increased mitoses
– No BRAF v600E mutations
– Absence of extrathyroidal extension and/or distant metastases

NIFTP Cytologic diagnostic criteria
– Hypercellular smears; microfollicles dispersed and in syncytia
– Sheets with branched irregular contours may be seen
– Colloid may be present – thick and within follicles
– Subtle nuclear features of PTC

The following should be absent or inconspicuous: papillae true with a fibrovascular core and papillary configuration; multinucleated giant cells, INCIs, psammoma bodies and marked cystic change.

When cytopathologists are faced with the above findings, a reporting option includes: “Although the architecture suggests a follicular neoplasm (or another diagnostic category), some nuclear features raise the possibility of FVPTC (invasive) or its indolent counterpart NIFTP; definitive diagnosis is not possible on cytology”.

Maletta et al showed that a blind review of histologically proven cases of NIFTP were retrospectively reclassified on cytology as follicular neoplasm (56 per cent), suspicious for malignancy (27 per cent), AUS/FLUS (15 per cent) and malignant (2 per cent). Mitto et al made criteria for diagnosing PTC more stringent: nuclear features of PTC and at least one of the following features: - frequent INCIs (>3), presence of papillae and psammoma bodies. They examined the effectiveness of more stringent criteria after one year of implementation. Their results showed that there was no significant reduction of the malignant category; most PTCs were diagnosed as malignant. There was minimal change in the proportions of TBSRT categories. Most NIFTPs were diagnosed as abnormal and placed in one of TBSRTC indeterminate categories. Only 21 per cent of NIFTPs were prospectively identified. Their conclusion was that using stricter criteria for a diagnosis of PTC did not change the sensitivity of thyroid FNA and helps to minimise placing NIFTP in an unequivocal malignant category.

Li et al and others have demonstrated that removing NIFTP as a malignant diagnosis alters the risk of malignancy (ROM) of TBSRT categories (Table 1).

The management of NIFTP is surgical lobectomy with no postoperative radiation. Long-term follow up studies show no risk of recurrence and/or metastatic disease in different series. 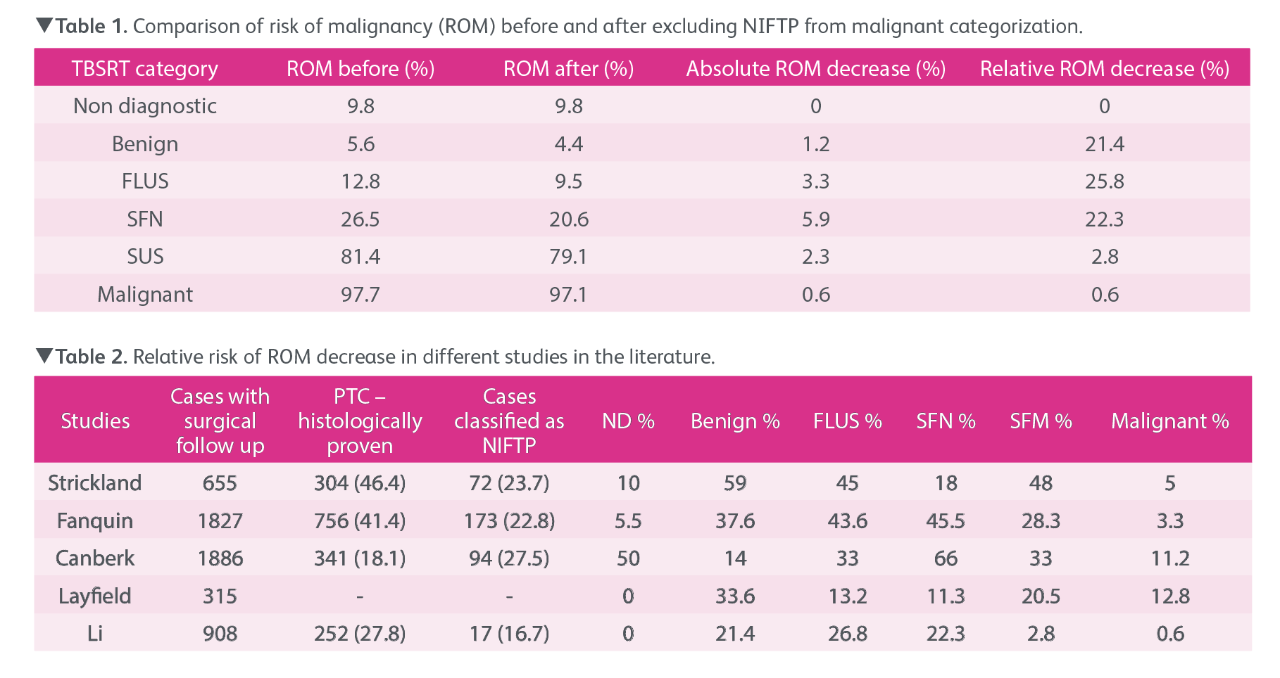 NIFTP experience in our institution

An audit of all thyroid FNAs in or institution between January 2014 and December 2017 showed a total of 2737 thyroid FNAs. Of these, a total of five cases of NIFTP were diagnosed. One histologically confirmed NIFTP had no prior FNA. Two cases that were originally diagnosed as NIFTP on histology behaved in an aggressive manner clinically and demonstrated metastatic disease. These were subsequently reviewed, and the original diagnoses changed to invasive FVPTC. One case showed extensive papillary morphology on cytology. And one case (discussed above) met inclusion criteria for both cyto and histology.

Unpublished data from our institution show that FVPTC is the most common PTC variant diagnosed. 70 per cent of PTC cases are classified as FVPTC; 30 per cent as classic variant. The other variants are rare. Our patient demographics include large thyroid nodules at presentation with an average nodule size of 4cm but presenting goitres can exceed 20cm in diameter.

A frequent indication for surgery is compressive symptoms due to size rather than a primary diagnosis of malignancy. We generally have fewer cases of incidental thyroid nodules as a result of liberal imaging studies. Literature notes that institutions with a high rate of FVPTC should theoretically have a higher incidence of NIFTP. This is not the case in our circuit. Our histopathologists are familiar with the change in terminology and reclassification of NIFTP as a non-malignant entity. Possible hypotheses for the low incidence of NIFTP in our institution includes advanced stage at presentation and potentially different molecular profile in our patient population.

Unfortunately, due to limited financial resources, we have no access to molecular testing, which is a serious impediment on studying, treating and monitoring thyroid pathology in our setting. The incidence of FVPTC is increasing; reported as high as 30 per cent in some studies. However, a high incidence of 70 per cent such as in our setting is unusual. Future studies should include the molecular profiling of our patient population to better understand the spectrum of thyroid disease in South Africa. In conclusion, the reclassification of non-invasive FVPTC to NIFTP helps to avoid unnecessary extensive surgery and avoid debilitating complications in a subset of patients. Clinicians and pathologists need to be aware of this diagnosis as it has significant clinical implications.

A frequent indication for surgery is compressive symptoms due to size rather than a primary diagnosis of malignancy.