Around 35 per cent of the population worldwide is lactase persistent.

Many adults have a genetically caused deficiency of the enzyme lactase (LCT gene) which results in intestinal disorders on consumption of milk or milk products. Molecular diagnostic testing is useful for confirming or excluding primary lactose intolerance as a cause of digestive complaints. The two main polymorphisms associated with lactose intolerance, LCT ‑13910C/T and LCT ‑22018G/A, can be determined in parallel using PCR-based microarray analysis. The use of whole blood samples streamlines the analysis by circumventing the need for DNA isolation. Fully automated data evaluation ensures standardised and objective results.

Primary lactose intolerance is a genetically caused deficiency of lactase, the digestive enzyme responsible for breaking down the disaccharide lactose into its sugar monomers glucose and galactose. Unsplit lactose is fermented in the ileum and the large intestine, resulting in unwanted by-products such as short-chain fatty acids, methane and hydrogen. These lead to digestive disorders and the typical symptoms of lactose intolerance, such as abdominal pain, nausea, meteorism and diarrhoea. Secondary manifestations include deficiencies, for example of vitamins, and as a result unspecific symptom such as fatigue, chronic tiredness and depression.

Lactose intolerance represents the natural state in mammals. Lactase activity decreases after weaning, and in adulthood is often only a fraction of the activity in infancy. Some humans, however, retain the ability to metabolise lactose into adulthood due to specific genetic variants.

In total, around 35 per cent of the population worldwide is lactase persistent. However, frequencies vary immensely between different population groups. Lactase persistence is prevalent in regions with a long tradition of pastoralism and dairy farming. It is particularly common in Europe and in populations of European descent.

Higher frequencies are found in the northwest of the continent, with a decreasing cline towards the southeast. In these populations, lactase persistence is predominantly linked to the polymorphisms LCT ‑13910C/T and LCT ‑22018G/A, which are located in the regulatory region of the lactase gene. The LCT ‑13910C/T and LCT ‑22018G/A alleles are also found in lactase persistent populations in the Indian subcontinent. In pastoralist populations in eastern Africa and the Arabian Peninsula, lactase persistence is associated with various other polymorphisms, such as LCT ‑13915T/G, LCT ‑14010G/C, LCT ‑13907C/G. In large parts of eastern Asia, almost 100 per cent of the population is lactose intolerant.

As well as the genetically caused primary form, lactose intolerance can also occur as a secondary, acquired form. This develops as a result of damage to the intestine, for example, from other gastrointestinal diseases, and can often be resolved within a few months. Coeliac disease, Crohn’s disease, infectious enteritis and injury from abdominal surgery are among the conditions that can lead to lactose maldigestion.

Molecular genetic testing enables verification or exclusion of primary lactose intolerance with high probability. It represents an important supplement to the hydrogen breath test and blood glucose test. These classic tests generally have a low specificity and sensitivity and are influenced by individual factors such as the composition of intestinal flora, colonic pH, gastrointestinal motility, and sensitivity to lactose fermentation products. Furthermore, classic tests cannot distinguish between primary and secondary lactose intolerance. In contrast, molecular diagnostic tests enable differentiation of the two forms. Genetic testing is, moreover, a non-invasive and more comfortable examination, which does not carry the risk of provoking symptoms of lactose intolerance in non-persistent individuals.

The two polymorphisms LCT ‑13910C/T and LCT ‑22018G/A can be determined simultaneously using molecular genetic tests such as the EUROArray Lactose Intolerance Direct. This test is performed on whole blood samples, eliminating the need for costly and time-consuming DNA isolation. In the test procedure (Figure 1), the sections of DNA containing the alleles are first amplified by multiplex polymerase chain reaction (PCR) using highly specific primers. During this process the PCR products are labelled with a fluorescent dye. The PCR mixture is then incubated with a microarray slide containing immobilised DNA probes.

The PCR products hybridise with their complementary probes and are subsequently detected via the emission of fluorescence signals. The data is evaluated fully automatically using EUROArrayScan software (Figure 2), and in the case of positive results, homozygous and heterozygous states are differentiated. Numerous integrated controls ensure high reliability of results, for example, by verifying that there are no other rare mutations in direct proximity to the tested positions, which could interfere with the analysis. All EUROArray processes from sample arrival to report release are IVD validated and CE registered. 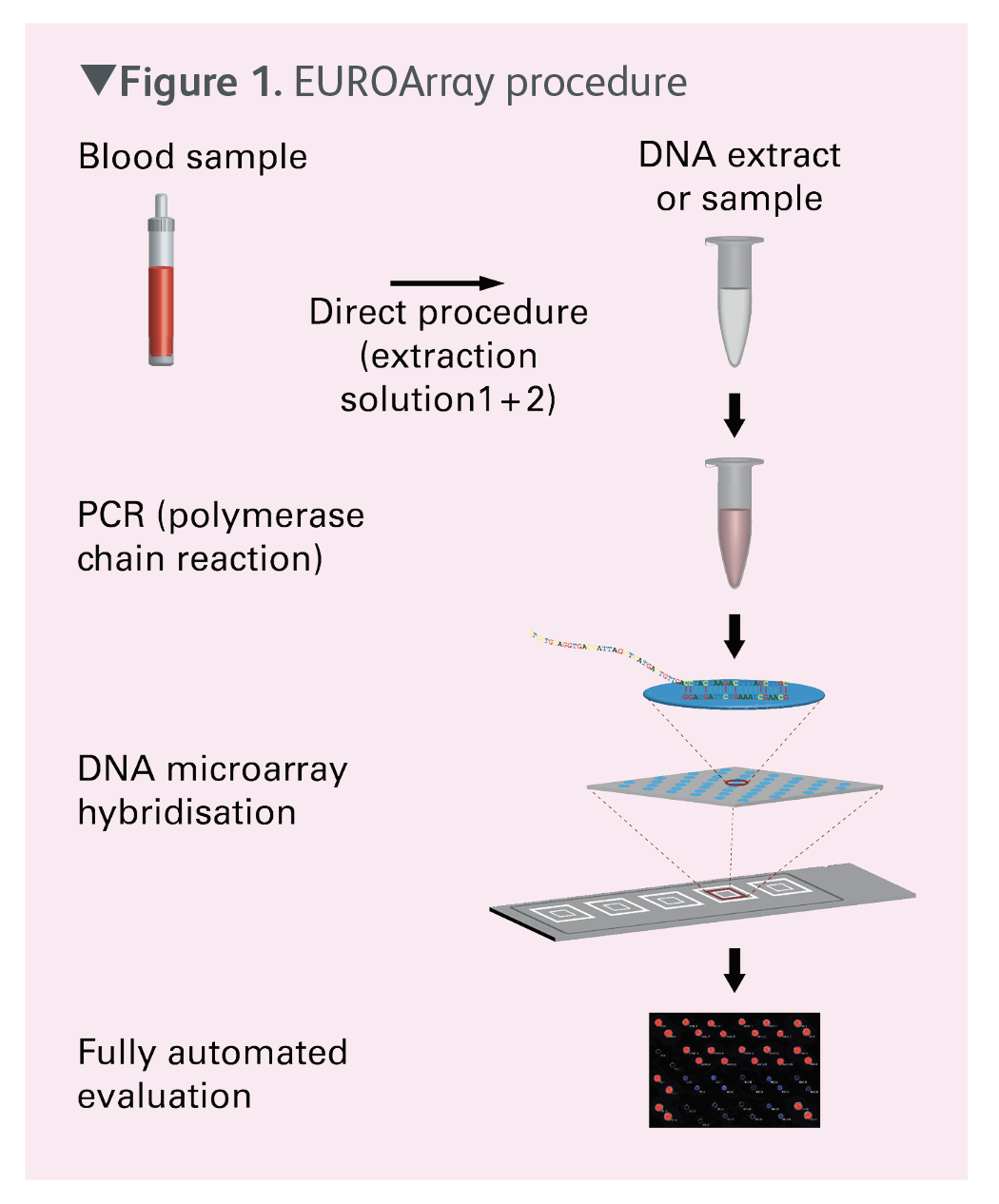 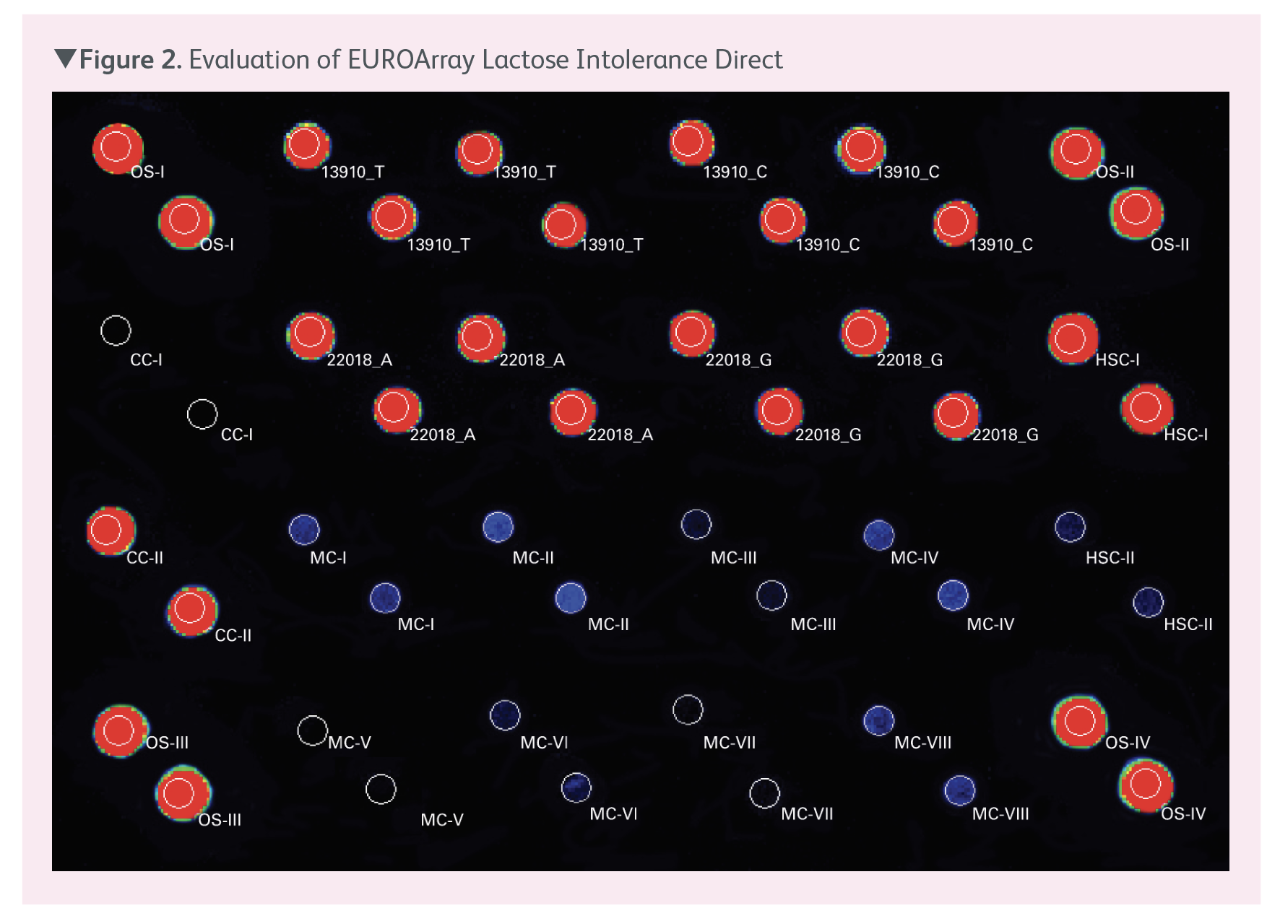 Digestive complaints on ingestion of milk or milk products may also be caused by an allergic reaction to specific proteins in milk. This should also be taken into account in differential diagnostics. Milk allergy is common in children and manifests with gastrointestinal disorders, atopic dermatitis, urticaria, asthma and anaphylaxis. Diagnosis of milk allergy is supported by the detection of specific IgE antibodies against milk proteins such as casein, lactoferrin, α- and β-lactoglobulin and serum albumin. Multiplex analysis based on defined partial allergens (DPA-Dx) is especially suitable for establishing a detailed patient sensitisation profile. In particular, the differentiation of reactions to heat-stabile and heat-labile components helps to establish, which milk products may be tolerated by the patient (e.g. cheese, yogurt) and which must be strictly avoided.

The advent of simple molecular genetic tests to detect the major polymorphisms associated with primary lactose intolerance has significantly enhanced the diagnosis of this common condition. Genetic testing is particularly useful for differentiating primary from secondary lactose intolerance, enabling more targeted patient management. Exclusion of the primary form helps to direct attention to searching for another cause of gastrointestinal complaints and may save patients from unnecessarily restricting their diet and potentially their calcium intake in the long-term. DNA testing is quick, easy and highly specific and thus a valuable initial test for patients presenting with sensitivity to dairy products.

The advent of simple molecular genetic tests to detect the major polymorphisms associated with primary lactose intolerance has significantly enhanced the diagnosis of this common condition.